When Yirmi's right front top tooth started to come in, I would look at it, wondering exactly how it was going to work itself out. I'd never heard of teeth being abnormal (except for mine that are yellow - both my baby and permanent teeth). It took a few times before I realized that something really wasn't right. It looked like either the tooth is split into a larger tooth and a smaller tooth or that two teeth were coming in fused together - either way, the larger tooth was too small to be a middle tooth and together they're too big to be a middle tooth.


I showed Ohad, who agreed that something was wrong and then, as soon as I got a chance, I called my really good friend (who happens to be my SIL too) who's a dentist. She knew right away what it was - tooth gemination or fusion. She said she'd seen quite a few cases and that the two main issues are that 1) you can't treat the teeth - if they get a cavity you can't fill it and 2) they sometimes don't fall out on their own when the permanent teeth come in & therefore have to be pulled. I read up on it and found that it's not that rare (1 in 200 in general, far less in front teeth) and that it rarely effects permanent teeth.


We realize this is not a big deal at all - more interesting than anything else, I guess.

I just wonder what we're supposed to answer when people ask how many teeth he has ;-)

So many people have come into this blog looking for pictures of tooth gemination and since I have more recent ones, since the tooth finished growing in, I’m putting them up here. Surprisingly, it’s much less noticeable than I thought it would be. 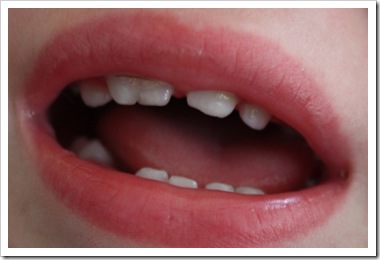 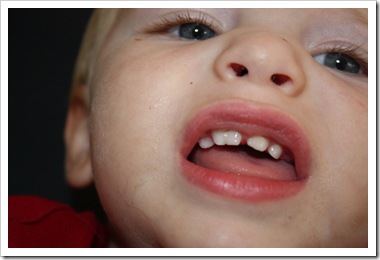 This is what Yirmi thinks about me taking so many pictures of his teeth. Such a cutie :-) 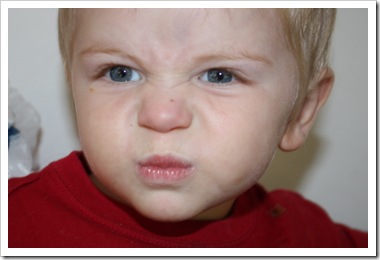 Email ThisBlogThis!Share to TwitterShare to FacebookShare to Pinterest
Labels: Yirmi

looks like he was super excited about having his mouth photographed! how ever did you get that picture? piper will not even let me peek!

That is really interesting. I am also impressed you got the picture anytime I want someone to look in Matty's mouth he closes it tight.

That's so interesting! I'd say two and a half teeth. So cool. I'm glad it's nothing to worry about.

My oldest daughter had what looked like 5 incisors across the top of her mouth. Dentist said the extra one was probably attached to the one next to it under the gum line and not to worry about it. They were right: It fell out eventually (she's now 10) and the new permanent tooth grew in just fine, looking like only one tooth.

He is adorable! I'm glad that his interesting tooth gave you a good reason to post a recent pic.

I noticed you have comment moderation enabled, so this seemed like the best way to get in touch with you.

I am a dental student and write the blog OralAnswers.com

I was wondering if I could use one of the pictures of your son on my site to illustrate gemination/fusion. I would provide a link back to your blog post. Please let me know. You can get in touch with me at tom@oralanswers.com. Thanks!

thank you so much for posting the picture of your sons teeth. My son also has it in the exact same place!!! I am also glad to know that it isnt that rare and I can quit overanalyzing it (LOL) and enjoy its cuteness. :)

Thanks for allowing me to use the photos, Rachel! You can click this link to read my post about gemination and fusion.

By the way, Rachel, I put your credit at the very top of the post and linked to your blog and main site. Let me know if you want me to do anything else.

Yes, I appreciate your pictures and information. My 3rd baby, now 14 months has just had a bunch of teeth come in and has a "double tooth" or whatever you want to call it on the bottom front. I just had never thought about this possibility before and was a little concerned but knowing that this isn't all that uncommon helped me not to worry so much. I realize that especially with baby teeth it really isn't very noticeable and oh well if it is I guess. I will have her pediatrician check it out at her next visit and see if anything needs to be done but I realize that it is probably just wait and see what happens.