In this article published by NewsMax (which my dad sent me), they discuss a recent study performed by Elisabet Stener Victorin at the Sahlgrenska Academy, University of Gothenburg, Sweden. In it, they studied women diagnosed as having polycystic ovarian syndrome (PCOS).

During the study, one group of women with polycystic ovary syndrome received acupuncture regularly for four months. They received a type of acupuncture known as “electro acupuncture”, in which the needles are stimulated with a weak low frequency electric current, similar to that developed during muscular work. A second group of women were provided with heart rate monitors and instructed to exercise at least three times a week. A control group was informed about the importance of exercise and a healthy diet, but was given no other specific instructions.

My mom sent me this article (yeah, sounds like I no longer have to do any of my own research) about children born via surrogacy, egg donation and sperm donation. Polly Casey from the Centre for Family Research at Britain's Cambridge University studied nearly 200 families – 128 with children born using assisted reproduction of one of the types mentioned above and 70 conceived without ART. She found that “the family types did not differ in the overall quality of the relationship between mothers and their children and fathers and their children”.

The article also discusses parents’ intentions as to revealing donor and surrogacy issues to their children and what they actually chose to do by the time the children were seven years old. 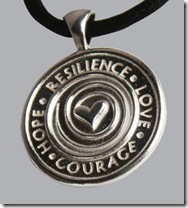 I recently came across LifeMedals, which was established by a woman who went through many years of infertility and many, many cycles of treatment. Her story is fascinating and I find that I really admire what she’s chosen to do with it – to create jewelry that reflects qualities necessary to get through really difficult times. The fertility hope medal (on the right) is one that I think so many women would love to have… I know I would. It also seems like a great gift for parents to give a daughter or daughter-in-law who is still trying to conceive.

Do you have a piece of jewelry that you connect with your infertility?

---
I’m not affiliated with LifeMedals.com and do not receive commissions or any  benefit whatsoever for purchases of jewelry.

Email ThisBlogThis!Share to TwitterShare to FacebookShare to Pinterest
Labels: infertility

What's the connection, if any, you ask? I just read this article by Michael J. Breus about a possible link between lack of sleep and impaired fertility. He mentions these points:

He quotes this article by Toni Parker that discusses research performed in Boston on women athletes who were given leptin to help resume their menstrual cycles and restore ovarian function. (There's a movie clip and several tips on how to sleep better there too.)

And while I find all of these studies interesting - and their advice good to follow, just for general good health - I think it's still important to say that a lot of cases of infertility can't be solved simply by getting a better night's sleep - on the other hand, you really have nothing to lose...

CNN ran an article yesterday about infertility in China. When I think about China and babies, my first thought is how awful it must be to be limited to just one baby and how sad it is that some parents feel that having a daughter is some sort of failure… Even with my being so aware of infertility, China wasn’t one of the places I thought about. (Although I have thought about China for a lot of other reasons, including my parents’ multiple trips there – see http://drsavta.com/travelkosher/ for amazing pictures and fascinating information, especially if you keep kosher and are interested in having the best tour guide ever… BTW, they’re going to Vietnam & Cambodia too.) Anyway, I found the article both interesting and surprising… and I’m happy for the couple featured in the article that they ended up having not one but two healthy babies :-)

I updated my post about tooth gemination and added new pictures.

I'm discovering that there's a nice community of infertility twitterers. I'm planning to create a directory (sign up in the comments of this post), but so far there haven't been too many sign-ups (1, if I recall correctly). So... I was going through Machon Puah's tweets and found a better article than the one I recently posted - The secret life of sperm is unlocked.

I'm still skeptical of people's willingness to accept results of such a test, if and when it finally exists.
Posted by Rachel Inbar at 1:13 AM 1 comment:

I finally opened a twitter account for Fertility Stories (feel free to follow me - http://twitter.com/fertilitystorie) and someone sent me a message asking me if I'd seen this article.

The article mentions Dr. Martin Brinkworth, Dr. David Miller at the University of Leeds and Dr. David Iles (but doesn't mention where -if anywhere- results of the study are being published). It summarizes their findings:

The study researchers have found out a mechanism called lock-and-key mechanism by which reproduction takes place.
In living organisms, sperm and egg cells unite in a distinct way. The sperm cells have keys (genetic signals or codes) and the eggs have locks (genetic signals or codes) and only the most suitable key signal can fit into the lock of an egg.

OK. Sounds interesting, but how does this help, I asked myself... Later in the article comes their explanation:

The scientists could use the newer understanding to develop some test to screen infertile man. This would cut down the failure rate of IVF by 75 percent as filtering out male candidates who can never produce children would become possible.

To this, all I can say is, "Yeah, right". Who's going to take a sperm sample that looks fairly normal and then run it by a lab that stamps a big "FAIL" on the results and decide, "oh, OK, so I'll just never have a biological child"? And what happens if the woman, even just once, got pregnant naturally and, even if it ended in miscarriage, are they really going to accept that his sperm isn't able to fertilize her ova? I just don't believe that a lab test, without ever actually going through the process of IVF is going to convince the average couple...

Now, if these guys could find a way to fix the 'key' mechanism, I'd be the first to say they were on to something...