Mistakes that should never happen

It should never have happened that doctors transferred the wrong embryos to Carolyn Savage. I feel terrible for her and for her family and some people may think that Paul and Shannon Morell got a good deal - no pregnancy, healthy baby - but I feel terrible for them too. They missed out on experiencing a pregnancy, on being there and able to feel his first kicks and I bet they've also got some guilt about taking the baby (who is biologically theirs) from Sean and Carolyn Savage - even though the mistake wasn't theirs. I have a lot of respect for Sean & Carolyn who decided to continue the pregnancy - I can think of all the reasons why they "had" to, but I can think of a lot of reasons why they might not want to too. I hope the two families will be able to form some kind of relationship that will give both a sense of peace about what happened.

Dr. Grumbles posted an article about Ochsner Hospital (in New Orleans) that was shut down due to "mishandling of frozen embryos". Some of the embryos are mislabeled or missing. Missing I've heard of before - inexcusable and horrible, but not nearly as scary as mislabeled. I can't imagine the 100 families (or so) who are dealing with this news. When I was going through IVF it occurred to me that there could be a mix up, but then I thought, "I'm putting crazy ideas into my head. That's exactly what these people do - keep the embryos labeled correctly so there are no mistakes - and they know how important it is." One would hope...

These recent events make it even more understandable why some people would choose to have the entire process supervised. For many years, orthodox Jews (particularly ultra-orthodox) have had specially-trained supervisors who watch the process from start to finish, making sure there are no mix-ups. This article discusses the cooperation formed between The Jewish Community Council of Montreal (Vaad Ha’ir) and the McGill Reproductive Centre, located at the Royal Victoria Hospital - they've launched a program that strictly adheres to halachah (Jewish Law) while offering the latest technology, including in vitro fertilization (IVF). I bet more and more people, not only Jews, are going to be interested in this type of supervised IVF in the near future.
Posted by Rachel Inbar at 5:36 AM 2 comments:

"I was conceived accidentally by a couple of teenagers in the back seat of a 1960s pink Ford Zephyr at the drive-in movies in Adelaide. I don't know what was playing that night, but it obviously didn't capture my parents' attention. Four months later, my Catholic grandparents marched their disgraced children down the aisle...

Except for my grinning father wearing a tight borrowed suit, my 18-year-old mother and the rest of the family looked grim faced in the wedding photos. My parents went on to have my little sister three years later. Their marriage lasted 15 years, which is not a bad track record for a shotgun wedding.

And so it was, that my mother warned me not to make the same mistakes she’d made. “Don’t get married young, see the world, go to university, have a career, have lots of boyfriends before you settle down and most importantly, don’t get pregnant accidentally!”

Dutifully, I followed my mother’s instructions. I went to university and studied journalism, landed a job as a TV reporter, worked in London and Europe for six years, lived with my violinist boyfriend in Switzerland and traveled the world.

When I met my husband-to-be, Stuart Ziegler, in Sydney, I was 31 and ready to settle down. Within a few months, I fell pregnant accidentally. I was excited but Stuart wasn’t so thrilled. Our relationship was still new and he was worried about how he’d support us. My mother’s words were ringing in my head, “Don’t ever make a man marry you because you’re pregnant.” So with a heavy heart, I had a termination. A decision, we both came to deeply regret.

Six months later Stuart and I were married. I threw my contraceptive pill away and we tried in earnest to start a family. Nothing happened after the first year. I wasn’t too worried. I was working as a TV reporter and traveling often. It was probably just bad timing, I told myself. After the second year, I began to worry I’d damaged my fallopian tubes somehow with the termination. Tests revealed everything was fine.

By the third year, the strain was taking its toll on our marriage and I blamed Stuart for ‘making me have an abortion.’ We began to argue more than we were having sex. By the fourth year, family and friends stopped asking about the ‘pitter patter of little feet.’ When I heard about friends falling pregnant easily I’d smile and congratulate them and go home and cry.

I started to investigate IVF but the only books I found were technical manuals and a devastating memoir by a woman who tried unsuccessfully for years and suffered terrible side effects from the drugs.

At first, I stubbornly rejected IVF, saying, “We’ve conceived once naturally, we can do it again!” Instead we spent a fortune on acupuncture, naturopaths, Chinese herbalists, spiritual healers and ayurvedic medicine. By now, my sense of humour was drying up and according to my doctor, so were my eggs.

Around the time of my 37th birthday I met a woman at a party who told me she’d just had twins using IVF. When I told her my age, and that we’d been trying to conceive for five years, she said, “For God’s sake woman, get yourself down to the Baby Factory and get on the IVF program. You’ve got no time to lose!”

So that’s exactly what we did. After talking to the nurses at Sydney IVF, I threw down my visa card and said, “Book us in.” At last I felt like we were doing something proactive. Every morning Stuart would inject me in the bottom and except for one jab, which made me feel like my legs were crawling with ants, I didn’t have any adverse reactions to the drugs.

I didn’t tell anyone at work what we were doing, but every morning I felt buoyed by my secret when I logged on to my computer with the password “Zoë Ziegler.”

Harvest or egg pick-up day was the first anniversary of September 11. As I placed my legs in stirrups and winced while the doctor extracted eggs from my pumped up ovaries with a long needle, I wondered what sort of world I would be bringing a child into. But the human instinct to procreate seems to override logic, good sense and even fear.

My pride at producing the grand total of nineteen eggs ­ as if I was a prize-winning chook ­ was dashed the next day when only three fertilised. I couldn’t help wondering whether my crusty old eggs were to blame or my husband’s lazy sperm.

At Sydney IVF, they grow the fertilised egg for five days until it’s a multi-celled blastocyst, before transferring it into the mother’s womb. It seemed surreal, that while we were at work or out to dinner, our ‘offspring’ were growing in a petri dish in the city.

Every day Stuart would ring the lab to see how ‘the little guys’ were doing. In the meantime, I tried to convince Stuart we should have two embryos, rather than one, transferred to increase my chances, even though our doctor had warned us we could end up with twins. I left a letter on Stuart’s desk headlined: ‘Ten Reasons Why We Should Have Twins’ followed by bullet points. Stuart still laughs about it today and wished he’d kept that paper to remind me whenever I complain what a handful one child is.

As it turned out ­ we didn’t have the twin option. According to the lab, one blastocyst was way out in front as an ‘A’ grade specimen, which meant the cells were dividing rapidly while the other two were growing more slowly. They recommend transferring the good one and freezing the other two as back up. As it turned out, the slower blastocysts stopped dividing and simply disintegrated before they even got to the freezer. I was devastated. The doctor tried to reassure me. “It’s not every day I get to transfer such a good looking blastocyst,” he said.

I’ll never forget looking down the microscope at what we nicknamed, the ‘blasting blastocyst’ that was to become Zoë Ziegler. After the doctor had transferred the fertilised egg into my uterus, I asked him if I should go home and put my legs up, so it wouldn’t fall out. He laughed, “There are women out there who have no idea they have a five-day-old embryo growing inside them and they’re drinking champagne and dancing all night. Now it’s simply up to that embryo whether if wants to become a baby or not.”

Somehow, I found that strangely reassuring. For all its incredible technology, IVF still has to leave room for the magic and mystery of creation.

Why does new life sometimes spring unbidden from a once-off romp in the back of a car and other times refuse to blossom despite years of yearning? My newfound awe sent me on a quest to interview other people who’d also experienced IVF. I sought both men’s and women’s personal stories. As it turned out, it was mostly women who responded. I was touched by their open hearted and candid stories. Together we sat in their kitchens or on their sofas and laughed and wept at their journeys.

Not all the stories in this book have happy endings like mine. Some have given up IVF after years of trying without success; others are still on the treadmill.

Women also tell of enduring personal tragedies in their quest for a child; while one woman mourned her brother’s suicide, another was dumped by her partner in the middle of her IVF cycle. Neither gave up their dreams of becoming mothers.

I also spoke to a remarkable young woman who was the product of one of the earliest IVF programs. At school she was teased and called a ‘test tube baby’, now she’s an ambassador for an infertility network.

Assisted reproductive technology has also made it possible for gays and singles to be parents too. A gay male couple and a single woman in her forties share their stories of baby hunger.

All these memoirs are very different. All display courage, determination, vulnerability, love and proof that the desire for a baby is bigger than us all.

P.S. As I wrote this introduction, my pregnant belly pressed against the desk. After Zoë turned three, we decided not to do IVF again and be content with one child. I gave away the high chair, the pram and my maternity clothes. A month later my hands shook as I held the pregnancy test and looked at the two red lines showing a positive result. Our second daughter, Sienna - the homegrown type, was born in January 2007.

*reprinted here with permission from the author
Posted by Rachel Inbar at 12:25 AM 1 comment:

There's a great article in Thursday's New York Times - Shelagh Little writes about making the decision to stop fertility treatments and live without children.
Posted by Rachel Inbar at 12:32 PM No comments:

OK, I realize this is off-topic, but Ohad spotted this in our garden today, growing in the pot with the basil and we have no clue what kind of mushroom it is. Any ideas? 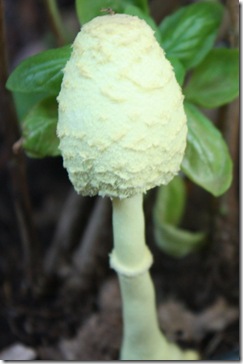 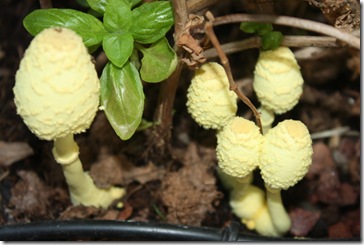 And, if I’m already off topic, I welcome you to visit my new blog – http://www.internationalshippingshops.blogspot.com – a listing of online shops that have items for decent prices AND ship worldwide. If you have any ideas for that, feel free to pass them on.

Posted by Rachel Inbar at 10:00 AM No comments: