Thanks to my mom for sending me this article, which I believe was written by Ron Krumer.
"Against almost all odds, 28-year-old Arin Nasser gave birth to a healthy baby boy this week thanks to a unique procedure that involved removing, freezing and implanting slices of her ovarian tissue.
Arin was born in the Arab village Gush-Halav near Safad in the upper Galilee with Thalassemia (a potentially fatal genetic blood disease) – her only hope was a bone marrow transplant.
When she was 21, Prof. Reuven Or and Dr. Michael Shapira of Hadassah’s Department of Bone Marrow Transplantation performed the lifesaving procedure. But before the operation, before she was married, Arin was determined to make sure that some day she could have children. She turned to Hadassah for help.
About two months before the transplant, Hadassah doctors removed exceedingly thin slices of her ovarian tissue with a special instrument originally developed by Prof. Eduardo Mitrani of the Hebrew University’s Department of Cell and Developmental Biology. Prof. Neri Laufer, Head of Hadassah’s Department of Obstetrics and Gynecology and Dr. Ariel Revel of that department collaborated with Prof. Mitrani in the development of the human applications for the instrument.
The (bone marrow -r.i.) transplant took, Arin recovered, returned to her Galilee home in Gush Chalav and married. A few years ago, she returned to Hadassah – this time with the hope of becoming pregnant. In a unique procedure, Prof. Laufer and Dr. Revel implanted pieces of the frozen tissue and reconstructed her ovaries. The microscopic thickness of the tissue their instrument produced enabled Arin’s body to accept them relatively easily and without complications. Under the supervision of Prof. Alex Simon, Director of Hadassah’s In Vitro Fertilization Center, Arin became pregnant. 3 days ago she gave birth to her first child – both of them in good condition – and both resting comfortably in the Charlotte R. Bloomberg Mother and Child Center." 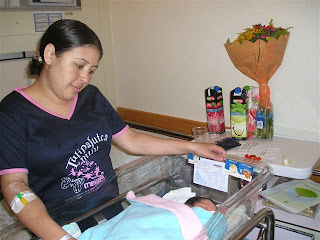 Another article of interest: Babies born a year apart after ovary transplant

Great news! It's wonderful on both counts - that she was helped via that transplant, and that her fertility was able to be preserved despite it. I would love to see this sort of story become more common.